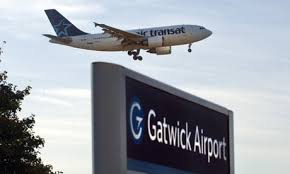 London Gatwick is the UK’s second largest airport and the most efficient single-runway airport in the world.
We serve around 200 destinations (more than any other UK airport) in 90 countries for 34 million passengers a year on short and long haul point-to-point services. The airport is also a major economic driver for the South-East region, generating around 23,000 on-airport jobs and a further 13,000 jobs through related activities.
London Gatwick is 28 miles south of London with excellent public transport links into the heart of London and elsewhere. It’s quicker to get from Gatwick to central London than from other London airports taking just 28 minutes from the airport direct to the financial district in London or 30 minutes to key tourist attractions.
Gatwick Airport is owned by group of international investment funds, of which Global Infrastructure Partners is the majority shareholder.
Gatwick Airport is located 3.1 mi north of the centre of Crawley, West Sussex, and 29.5 mi south of Central London.
Address: West Sussex RH6 0NP, Code: LGW. Area: 8 ha, Elevation: 62 m,
Phone: 0844 892 0322

Gatwick Airport began life in 1930 as a small enthusiast flying club (Surrey Aero Club) and was issued with its first public licence in 1934, which allowed the airport to be used by commercial aircraft. Since then, we’ve gone from strength to strength. Take a look at the key milestones in our history, starting with the most recent, to discover more.

In June 2008, Gatwick celebrated its 50th anniversary. Later that year in September, BAA announced that the airport would be put up for sale.

In 2006, BAA was acquired by Airport Development and Investment Ltd (ADI), a consortium led by Grupo Ferrovial.

In May 2005, the world’s first air-passenger bridge to span a live taxi-way opened connecting the North Terminal to 11 new pier-served stands. The bridge is large enough for a Boeing 747 to pass underneath.

In 1986, following the passing of the Airports Act, the British Airports Authority was dissolved and all its properties, rights and liabilities were passed to a new company, BAA. BAA was privatised and floated on the London Stock Exchange in 1987.

In 1965, the British Airports Authority was established and assumed ownership of Heathrow, Gatwick, Stansted and Prestwick airports.

Originally, Gatwick had only one passenger terminal, the South Terminal and in 1962, the terminal doubled in size with the construction of two new piers.
In 1952, the Government approved the development of Gatwick into a direct alternative airport to Heathrow with a significant investment programme and in 1956 Gatwick closed as building began on ‘the new London Airport.’ The airport cost £7.8 million to build and was officially opened by HM The Queen on 9 June 1958. The ‘new’ Gatwick was the world’s first single facility airport accessible by all modes of transport – air, rail and road.

Getting to the Airport by Car and Motorbike

Gatwick is 28 miles (45km) south of London, linked directly to the M23 at Junction 9 and to the A23 London-Brighton road.

Motorcyclists can park free of charge at Gatwick using the dedicated bays in the car parks.
Motorbikes must not be left in car parking spaces.Motorcycle parking bays can be found in the following locations:
South Terminal: Car Park 2 (on each floor).
Please note that anchor points are not available, and that for security reasons motorbikes will be removed if not parked in the designated areas. One of the most visible aspects of the security process is making sure our passengers do not take on-board prohibited items – a task that inevitably adds time to your journey through the airport and onto your plane.

Knowing what’s allowed and what’s not allowed before you arrive – as well as allowing yourself plenty of time to follow all the security procedures when you get to Gatwick – will save you time and inconvenience and make your journey more enjoyable.